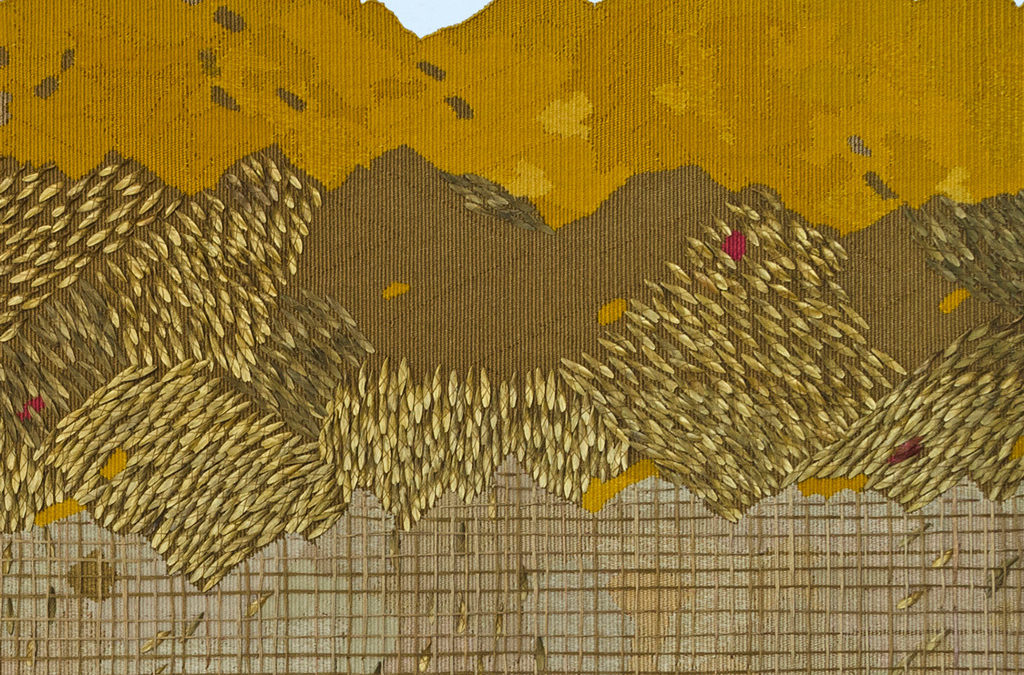 The Cordis Prize exhibition and symposium

The Cordis Prize for Tapestry was initiated by Miranda Harvey and her husband, the crime writer Ian Rankin. https://www.heraldscotland.com/news/17498523.weaving-a-new-story-ian-rankin-on-how-he-fell-in-love-with-tapestries/?ref=twtrec
They wanted to celebrate tapestry by offering an £8000 prize, the world’s largest, with an exhibition for shortlisted entries, to celebrate and stimulate the medium. This year was the fourth time it was offered and the first in a beautiful and light-filled venue, Inverleith House in the Royal Botanic Gardens of Edinburgh. The new venue is larger than the previous one, so could accommodate seventeen varied approaches to tapestry from international artists in a spacious and careful hang. Included in the mixed selection were non-traditional pieces, such as Anna Ray’s stunning Tassel. The winner, Brita Been of Norway, was announced during the opening party on 15 March. Her tapestry celebrated the folk art embroidery of Telemark, where she lives. https://www.bbc.co.uk/news/uk-scotland-edinburgh-east-fife-47589643

Then on Saturday there was a symposium called The Thread Runs Both Ways, on the subject of the heritage and future of tapestry. http://thetapestryprize.org/cordis-symposium/ Prof Lesley Millar and Susan Mowatt both talked hearteningly about how tapestry is resurgent, that textiles are higher profile than they have been for decades. However Lesley said venues often shied away from issued-based work. Besides the excellent headline speakers, several of the participating artists each spoke for five minutes on their practice or another topic related to the theme. I spoke about my pet peeve, the misuse of the word tapestry, and suggested (humorously) how weavers could address the issue, eg by putting stickers on non-tapestries which say ‘Ceci n’est pas une tapisserie’.

I always think that the best part of such events is catching up with old friends and colleagues, possibly people you haven’t seen for years, and meeting new ones, perhaps artists whose work you know and admire. Like tapestry, it’s about making and maintaining connections. Sometimes during conferences, I also get ideas for future work, not necessarily due to the particular ideas being spoken about, but just from the stimulation of what is floating around.

The day before the symposium Fiona Hutchison, who organised it with Becca Pollard, invited those who had travelled to Edinburgh to a Weavers’ Grand Day Out. She took them to the Dovecot Studios, the Royal Scottish Museum, then to WASPS Studios, to see Sara Brennan’s and her studio, then to mine. After the opening party, we also went out for a meal together, where we were able to chat and relax.

It was an exhausting couple of days, with seeing, talking and listening all done to the max. The exhibition runs until 27 May, so please come to see it if you can. You would also be welcome to my studio!